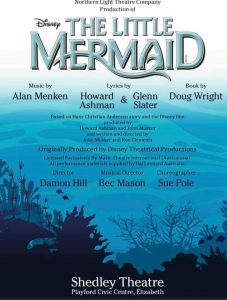 Based on the well-loved Disney animated movie and the original story by Hans Christian Andersen, The Little Mermaid tells the story of Ariel, youngest daughter of King Triton, who so desperately wants to leave her life under the sea and be a part of the world above. The evil sea-witch, Ursula, grants Ariel’s wish to become human—but only if Ariel sacrifices her voice as payment. Ursula intends to usurp Triton’s power and when Ariel falls in love with Prince Eric, Ursula’s evil plan looks like it may succeed….

With all the hit songs from the Disney animated movie, including ‘Part of Your World’, ‘Under the Sea’, ‘Poor Unfortunate Souls’ and ‘Kiss the Girl’, this show is sure to be loved by audiences of all ages.

ARIEL Female
Ariel is the youngest of King Triton’s seven daughters. A strong willed and adventurous mermaid, she has a fascination for the world above, much to the anger and concern of her father, King Triton. Though she can be rebellious against her father, she is accepting of others’ differences and is far more open minded and much more questioning of things. The relationship she has with her father is typical of many relationships between fathers and daughters. This generation gap, and the growth it allows, is a big part of the story, so if you intend auditioning for Ariel, please bear this in mind.
Because Ariel loses her voice during the course of the story, it is important that the person playing the role is able to convey a range of both thoughts and reactions via mime.

PRINCE ERIC Male
Charming and sensitive with a flair for romance, Prince Eric also has a sense of adventure and is, in many ways, quite similar to Ariel. He too, is reluctant to be coerced into a life that has been predetermined for him by other people. Courageous and determined, he will stop at nothing to find the girl with the beautiful and mysterious voice.

SEBASTIAN Male
A meticulous and uptight crab. Prone to being somewhat overly dramatic, he is fidgety in his movements and highly strung. As choirmaster in Triton’s court, he is rather proud of his musical abilities, which leads to frustrations with Ariel and her lack of focus. Caught between obeying King Triton’s commands and his friendship with Ariel, Sebastian often finds himself in a tug of war with his own conscience.
This role is written to be performed with a broad Caribbean accent.

FLOUNDER Male
Ariels best friend, who has a secret crush on her. Flounder pretends to be brave and nonchalant when faced with dangers or new experiences but is ultimately unable to keep the facade up for very long. Whenever he is in the presence of his unrequited love, he is awkward and anxious.

We are looking for a male who can play this role with ‘an innocence of youth’.

SCUTTLE Male
A self-confessed ‘expert’ on all things human, Scuttle is off-beat, friendly, enthusiastic and eccentric. His knowledge of the human world leaves much to be desired, although Ariel finds his stories enthralling and fascinating. Another great character role. Scuttle performs a tap dance number in act 2.

KING TRITON Male
King of all the ocean, Triton is Ursula’s younger brother and Ariel’s father. He struggles to find a balance between his political and paternal responsibilities. Although frustrated by the angst of his seven daughters, he loves them and is fiercely protective of them. This role requires strong acting abilities as Triton goes through a character arc during the course of the show and learns that sometimes loving someone means you need to let them go.

GRIMSBY Male
Prince Eric’s uptight and very proper valet. He is like a father-figure to Eric. Charged with finding Eric a suitable wife, Grimsby is frequently exasperated by Eric’s carefree attitude towards his future. Comic timing and great facial expressions are ideal for this role.

CHEF LOUIS Male
Melodramatic, over-the-top and with a taste for the violent and macabre, Chef Louis is a wonderful cameo role. This role requires someone who can play a larger-than-life comic character. There will be a degree of physicality needed in this role. A strong and exaggerated French accent is required.

MERSISTERS X 6 Female
Triton’s six older daughters, AQUATA, ANDRINA, ARISTA, ATINA, ADELLA and ALLANA.
They each have a lot of sass and are typical sisters. They bicker amongst themselves, they vie for their father’s attention and gossip to each other about Ariel and her behaviour.
Each sister needs to develop her own personality. Great potential for comedy.

FLOTSAM and JETSAM Male or Female
Ursula’s sinister electric eel sidekicks. They are sly and cleverly use the power of suggestion to entice Ariel into Ursula’s tentacles.
Puppetry skills are needed for these roles.

ENSEMBLE
An Adult Chorus, as well as Dancers, are needed to play everything from Sailors and Maids to Chefs, Sea Creatures, Gulls and Princesses. All need to be able to sing and move.
Everyone wishing to audition will need to attend a group audition on Sunday June 20th

The roles of WINDWARD, LEEWARD and the ship’s PILOT will be assigned from the chorus.